One of the most frustrating parts of this new writing life has been my lack of routine. Most of that is due to the fly-by-the-seat-of-our-pants summer life with kids meaning outings and play dates and pool time are not always planned and always taking precedent over my need for writing time. Whether that’s a good or a bad thing is moot since it’s a decision I’ve madeas to how I want to spend time with my kids this summer. It is what it is.

What, I realized today, is further complicating this lack of routine is my complete and utter lack of process. Or rather, my undeveloped process. All writers are different. Some outline their plot from start to finish before writing. Others start with the germ of an idea or character and see where it takes them. Others write detailed backstories before starting on page one. Others write the end first before working backwards to the beginning. Some write in a linear fashion. Others just write whatever hits them and stitch it together later. Some write with music. Others in silence. Some in the middle of the night, others first thing in the morning.

The only other time I took something large from beginning to end was for NANOWRIMO in 2010. I wrote that “book” linearly and it was torture. But it was mostly torture because I knew I had to keep slogging forward every day despite how bad it was or even when I knew it was taking a wrong turn simply so I could finish it. I’m glad I did it. It proved that I could. But is it a stellar work? Not even close. And I don’t feel bad about that. It was a learning experience and one I truly value. 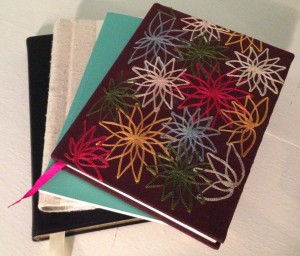 The current rotation of journals that make their way into the world with me.

That being said, I still am unsure of my process. I’m not sure what works best for me because I haven’t yet had the luxury of time to determine how I work best. I know in a few short weeks, we’ll be easing our way back into school routines and I’ll be faced with five mornings a week of solitude. I am hoping then I will develop a true schedule or routine to apply to my writing – something I’ve never had the luxury to do – and I think whatever process I have will come then.

In the meantime, I’m scribbling in notebooks, forgetting character’s names and completely losing my way when it comes to what it is I’m doing with them. But a house doesn’t look like much when you’re digging a hole for the foundation. So this mess I’m in right now, I’ll consider my hole. A hole that I know will eventually be filled with something solid that I can build a framework on and then make pretty with a few cans of paint and detailed finishes.

Or at least I hope so.