It’s been 10 days since peanut’s last nap. I’m beginning to believe that it is truly over. No more two to three hour siestas. No more mommy free time in the afternoon for a Facebook fix, blog rant and DVR catch-up. No more deep breaths. No more time to think through the next activity to keep my toddler’s five second attention span occupied.

We’ve instituted “quiet time,” which is relatively quiet – he stays in his room, looks at books, quietly plays with stuffed animals or quietly destroys his room like a stealth agent ransacking the bad guy’s hotel for the hidden microfilm: 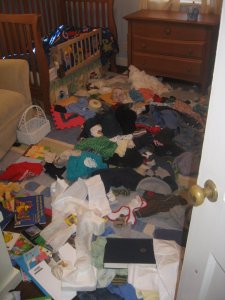 How did I not hear this going on?
Our routine has been our routine for more than a year and a half. Adjusting to this new normal has been really rough on mama. Although peanut’s tucked away behind a closed door and quite happy to have some time away from me, I can’t seem to relax into my “free” time the way I did when he was sleeping. I’ve always got one ear out for a major meltdown or total room destruction. I’m thinking ahead to how rough clean-up is going to be once quiet time is concluded. I’m trying to brainstorm which activities we can fill the remaining afternoon hours with that will not only keep him busy but won’t create a public meltdown because he’s overtired. And frankly, I’m bitter that the decision of a two-year-old to ditch his nap has completely turned my life upside down.

I know eventually we’ll have this schedule worked out. Quiet time will settle into something predictable. I’ll have it all under control. I know because we’ve been through it before when he gave up the morning nap back in the day of early toddler hood. We’ve been through it before when we were simply trying to get on any nap schedule WAY back in the days infancy. It was bumpy for awhile, but worked out in the long run.

Until the way smooths out, though, I admit I’m a little cranky, a little tense, a little irritable, a lot less the mother I want to be. And that is frustrating.

The upside, the kid’s pooped at the end of the day and down for the count by 7:30pm. That, and his future as a secret agent.

8 thoughts on “Nap Time, May it Rest in Peace”