I think the heat made us a little slap-happy yesterday. It certainly made us exhausted. So, while peanut naps and I relax in my central air (ahhhh…), I thought I’d share a couple of yesterday’s silly moments.

* Someone please explain to me which is the front side to the swim diapers? I was throwing one on the peanut so we could splash down with his sand and water table on the patio in the late afternoon while we were waiting for the house to cool down. 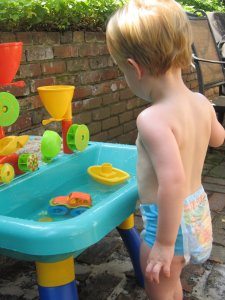 As I was putting the swim diaper on, I realized I couldn’t tell which side was the front or the back. I took an educated guess — putting the label in the front.

While he was playing in front of me, I thought, hmmmm, that’s a little bit of butt cheek I see. Maybe I put it on backwards. On further inspection, I noticed the “bow”:

“The rose goes in the front, big guy”

* We grabbed dinner at a local casual restaurant (since I wasn’t about to turn the oven on in that hot house) that was playing the best mix of music. As we were leaving, the Beastie Boys were on. As we waited for our car, Peanut was bouncing and swaying (about as close to dancing as we get) so the hubby sang along to “No Sleep Till Brooklyn” to encourage him, to which peanut responded in a sing-song voice:

Makes me wonder how he (or any toddler, for that matter) would rename other songs? Sounds like a fun party game…